Flathead make a tasty meal, but being a bit different from other fish they present a bit of a challenge for newbie filleters.
Keep in mind that they have sharp spines on the gill covers, and dorsal spikes, and sharp teeth too.
Here’s one effective way to fillet them.

How to fillet flathead – Method 1

How to fillet flathead – Method 2 (simpler)

Put the fish on its side and cut into the thick end of the fillet just behind the pelvic fins.
With the knife still in the fish, angle the knife to the back of the fish and proceed to cut the fillet along the backbone down almost to the tail, but leave the skin attached to the tail.
Pull the attached fillet away from the fish and start skinning the tail end of the fillet by running the knife between the skin and flesh with the skin-side down and the knife angled to the ground.
Once about 3cm of skin is off, grab the fillet and skin and carefully tear the skin off the flesh, this will take the bones with it and leave you with a fillet.

Some external videos showing how to fillet flathead are featured below. 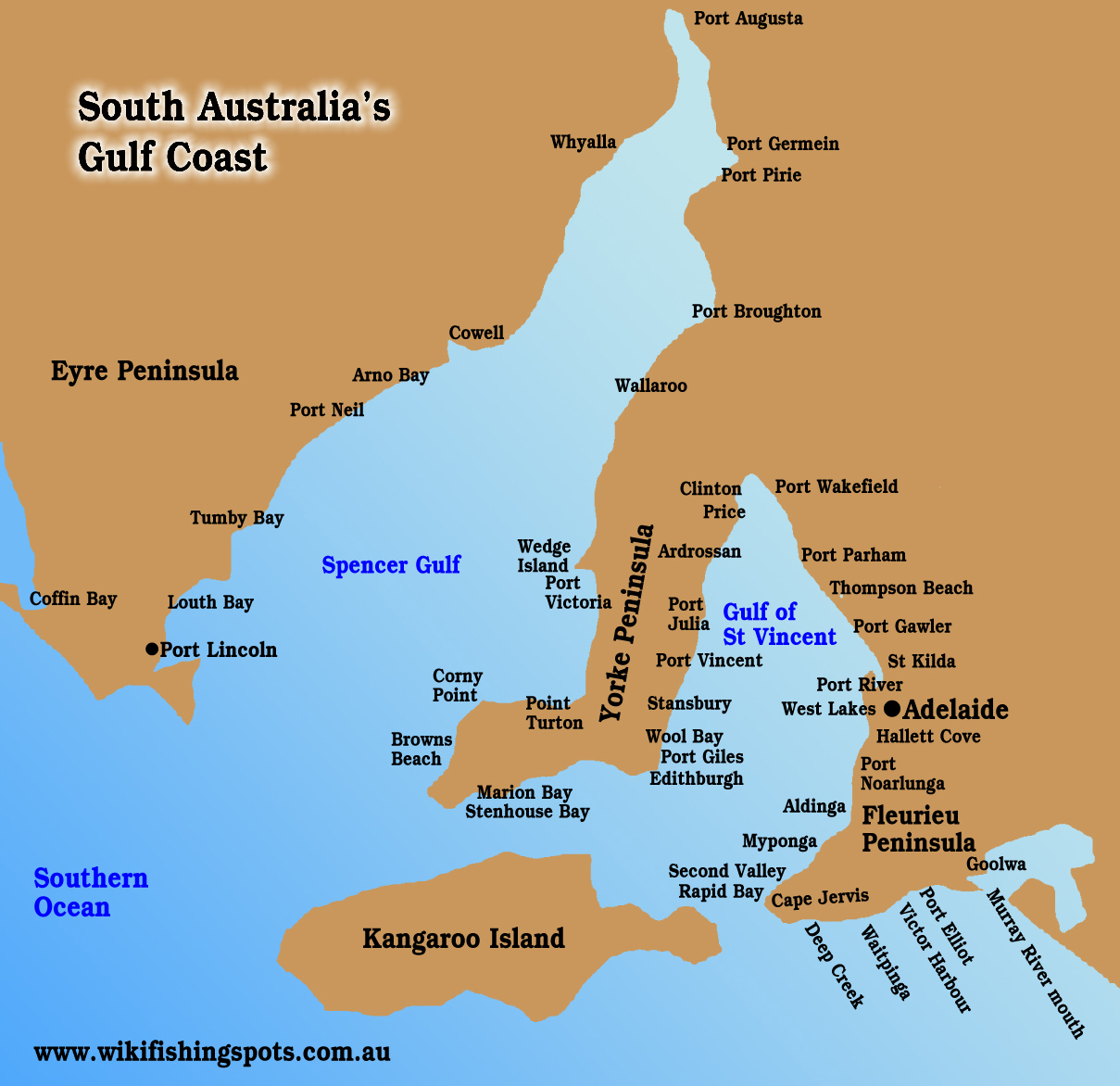 Port Victoria is a popular fishing holiday destination on the west side of South Australia’s Yorke Peninsula, about 190km from Adelaide.

The town has a sheltered all-tide boat ramp and a long L-shaped jetty.

Outside the island the seas are more exposed and suitable only for larger boats.

Summer snook are a popular jetty target, using lures or bait under the lights.

Boaters find plenty of snapper, spotted whiting and blue swimmer crabs in the shallow grounds around the island.

Snapper are best in summer and whiting best in winter.

Berley works well from a boat, but keep in mind that big white sharks are regularly seen in this area.

The waters in this region are shallow and often very clear, so it pays to fish with the lightest possible tackle.

Flounder are common in the bay and flounder spearing is a popular pastime.

Wauraltee Beach to the south of Port Victoria has coastal camping by 4WD track.

Spotted whiting are occasionally caught from the beach where the seagrass beds come closest to the beach, but yellowfin and silver whiting are the usual catch.

Fish the beaches at high tide.

To the north, Balgowan has an exposed boat ramp.

Some external videos filmed off Port Victoria are featured below.

Murray Bridge is the largest riverside town on the lower South Australian section of the Murray River.

The many shallow lagoons in this area are great locations to target big carp.

This area is an easy day trip from Adelaide.

Almost all fish caught from Murray Bridge downstream to the lower Murray lakes have a yellow tinge, and the red on redfin perch can appear almost non existent.

Mannum is a town on the lower South Australian section of the Murray River.

This area can produce callop, cod, redfin and yabbies, but there is usually better fishing to be had at locations further upstream.

The riverbanks from Walkers Flat downstream have historically been infested by the introduced willow tree.

There has been good fishing had by boat among the willows, mainly when the trees have full foliage in summer.

But where there are willows, bank access is restricted.

The area of the Murray River around Walkers Flat and the town of Nildotte produce some good fishing.

The lagoons across the river produce bag limits of yabbies, especially during summer after a flood, on a falling river.

Carp are almost always present and fun to catch on light tackle.

Swan Reach is an easy Adelaide day trip but this section of the river is also scenic enough for an extended boating holiday.

Fishing at Swan Reach can be productive for callop, carp and yabbies, with the area upstream producing the best fishing.

Blanchetown is on the South Australian section of the Murray River.

It is located next to the river’s Lock One.

There are good boat launching facilities.

Blanchetown is a great place for Adelaide day-trippers to fish the Murray.

This section of river often has good callop fishing.

Carp can always be had from the bank immediately below the lock boundary, and these are often big hard-fighting fish.

The river downstream from Blanchetown is scenic, with spectacular cliffs and good callop fishing.

The river further downstream fishes well for callop, especially in the area of Stockwell Pump.

Vehicle access, bank launching and camping is available along the Blanchetown-Swan Reach road to an area immediately opposite the pumping station.

Morgan is a historic town on the South Australian section of the Murray River.

Being close to Adelaide it is quite popular, and you will find it more difficult to find a piece of river to yourself here than towns further upstream.

The Morgan and Cadell sections of the river are productive for callop and carp, with occasional cod, both upstream and downstream of the towns.

Yabbies are usually about in big numbers in summer, particularly in the small creeks that enter the main stream.

Downstream from Morgan, approaching Blanchetown, there are numerous lagoons and billabongs that are worth a fish for callop, look for some submerged snags.

Hogwash Bend is a good fishing area on the South Australian section of the Murray River.

It is accessible by road along the Waikerie-Cadell road. There is bank launching.

It is a popular spot for camping.

The many creeks upstream and downstream are productive for yabbies in summer, particularly during a falling river.

Callop are usually in good numbers in this area.

Waikerie is a town on the South Australian section of the Murray River.

The main river between Lock Two and Overland Corner upstream is very productive for callop, carp, cod and yabbies.

Access is available for bank fishing along many tracks that branch from the main road between Kingston-on-Murray to Waikerie.

Good fishing can be had from the bank in the township, but boat fishing upstream for about 2km is better, fishing close to the bank.

Telegraph Cliffs further upstream is definitely worth a try for cod and callop, although a boat is necessary.

Downstream from Waikerie on the floodplain there is a bank launch on the first big bend and this will be one of the closest approaches to fish an area called Broken Cliff, which is a popular spot for callop.

For bank fishermen there is also an opportunity to fish Broken Cliff as it is accessible by crossing on the ferry and following the road on the northern side of the river.

A boat launch is feasible in this area during summer months.

Further downstream is Lock Two, fishos should fish try for about 1km downstream as this area is one of the most productive areas on the river.

The following boat ramps are located in the Loxton/Waikerie District …

A light spinning outfit is ideal for general lure and bait fishing in the river. If you are targeting murray cod you might need something heavier, but 6kg line is enough for most river cod.