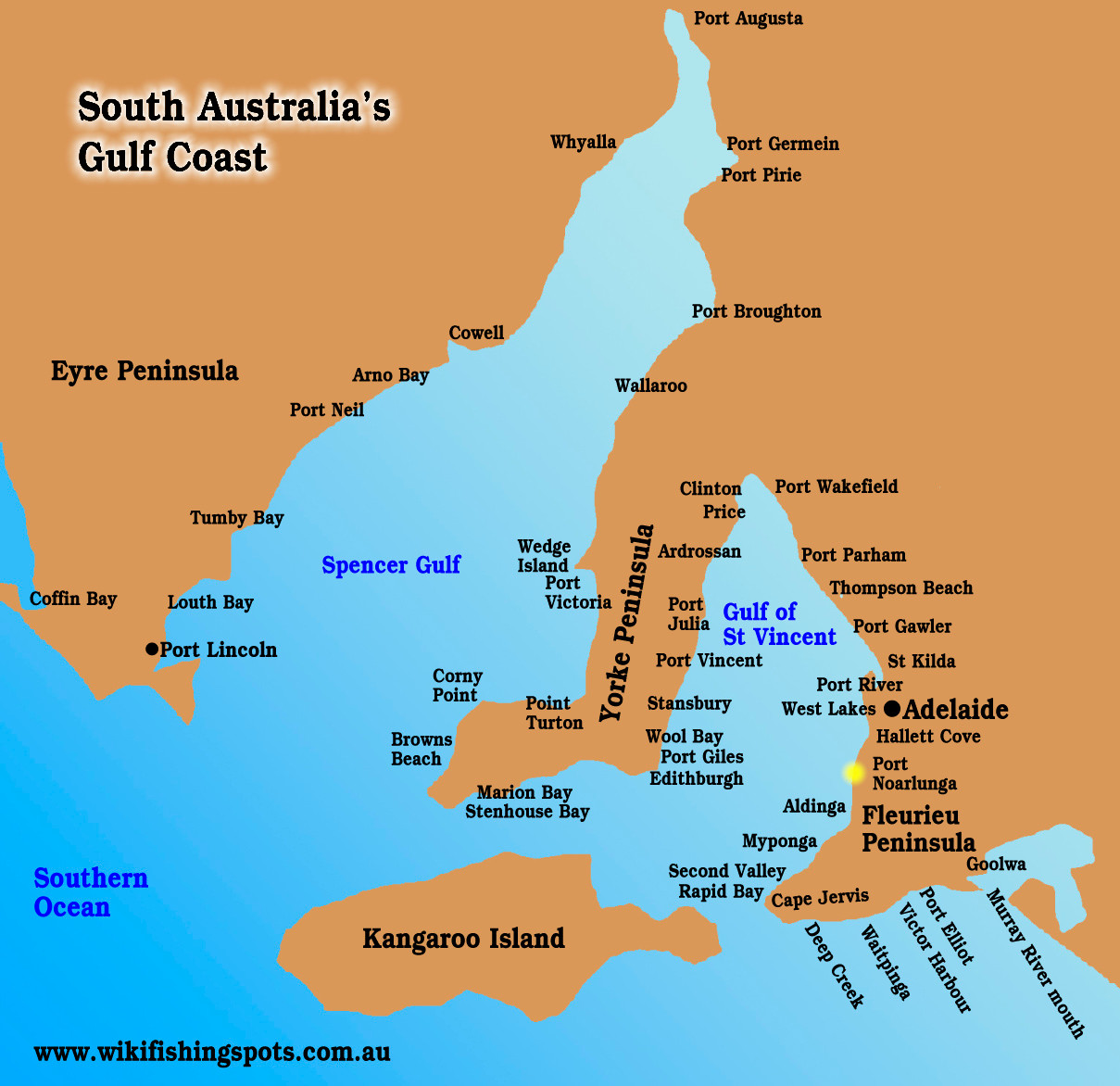 The Onkaparinga River flows to sea at Port Noarlunga, south of Adelaide.

This is one of the most important tidal waters for Adelaide fishermen, after the Port River and West Lakes.

The mouth of the ‘Onk’ is shallow and sandy but plenty of fish make their way through the entrance to go upstream.

Despite its metro location, there is every chance of landing a big bream, although small fish are abundant.

The river mouth and nearby beach is best for larger salmon in winter, usually on an incoming tide in the morning or afternoon.

More common are the juvenile salmon, which are caught year round.

Mullet are caught year round in the river, but are best on local beaches in autumn and winter.

Unlike mullet species elsewhere, yellow-eye mullet take meat baits of cockle or mince, but small hooks and light line are a must.

The SLSC Footbridge in the lower section of the river has salmon trout, mullet and bream, with a chance of school mulloway at night in summer, and sand flathead in autumn and winter.

Weatherald Terrace is a good spot to chase bream, mainly in summer, autumn and winter, with mulloway in summer at night.

The Sand Hills area has bream in summer, mullet in spring and summer and salmon trout all year.

Saltfleet Bridge has mulloway in summer at night, which can be caught at low tide.

River Road Bend produces mulloway all year on an incoming tide, with bream in spring and summer.

Seaford Line has mulloway all year at low tide, with bream in winter and spring.

Perry’s Bend is a popular area with mulloway in spring, summer, autumn and night. Bream are caught here all year, with salmon trout are caught in winter and spring on an incoming tide.

Other areas in the river not already mentioned can be fished if you don’t mind tackling the mud in a gumboots and/or waders.

A closed season applies for bream from September 1 to November 30 upstream of the South Road Bridge. You can chase mulloway above the bridge all year.

The Old Rail Bridge and South Road Bridge are good spots to fish for bream all year, with mulloway in spring and summer.

The Old Noarlunga upper section of the river is snaggy but full of bream, with a chance of mulloway.

Bream in the Onk respond to fine tackle, with a 2kg to 4kg rod-reel combo being ideal.

Use a tiny running sinker or no sinker at all. Peeled prawns work well as bait, but live tube worms are better.

To get the biggest bream, fish at night.

Salmon trout take a range of baits, while mullet prefer cockle or mince meat. A local quirk among fishos is to mix mince with curry powder.

Mulloway can be caught on 6kg gear. Use livebaits of small mullet or salmon trout at night. Occasionally mulloway are caught in daylight.

Being a small waterway, the Onk is ideal for canoe fishing. It is also a good place to try lure fishing for bream.

The freshwater section of the Onkaparinga River has trout and redfin, but access is difficult and much of the upper river runs through private property.

This surf rod can be matched with this spinning reel ... eBay listing here.

Star sinkers or snapper leads are generally used on a paternoster rig for surf and boat fishing. For most other fishing, ball sinkers are used, as part of a running sinker rig. See eBay listing here.

Some external videos filmed around the Onkaparinga River are featured below.

Barron River is a tidal waterway north of Cairns Airport.

The river has a boat ramp at Stratford, next to the Captain Cook Highway bridge, and also at Machans Beach near the mouth.

Much the same species are caught in the Barron as nearby Trinity Inlet, but the Barron tends to fish better on big tides.

There are several spots on the Barron suitable for landbased fishing, but keep in mind that large crocodiles are present.

The former Kamerunga bridge upstream from the highway is a fishing platform.

Upstream from the old bridge the bottom is rocky, and mainly cod, bream and jacks are caught.

The deep hole at the junction of Redden Creek has barramundi, jewfish, grunter and cod.

Another good spot is the last bend of the river before it enters the sea, and the drop-off along the mouth channel.

The Barron produces some big barramundi for those who put in the time. Large livebaits fished at night work best, but the fish also respond to well-presented lures.

Drop livebaits in deep holes, or near structure. Judicious use of a quality sounder can reveal the presence of single large fish.

Heavy rain can slow fishing down on the Barron

The sandbar at the sea entrance can fish well for queenfish, trevally, flathead and whiting.

Much tropical estuary and river fishing involves casting and trolling lures around snags, where a lure desnagger soon pays for itself. The simplest type is dropped on a cord ... see eBay link here.

Or for a true blue Aussie lure desnagger, try this one ... eBay link here.

When targeting barramundi and other large tropical estuary fish a baitcaster combo is the best option. The small overhead reels on these combos allow thumb control when casting, making lure placement easy. However practise is required to cast these reels and they do not cast tiny lures easily. A baitcaster combo loaded with 10kg braid will handle most barramundi and threadfin salmon, with 15kg line better for large dam fish among timber and when trolling big rivers. See a suitable baitcaster listing on eBay here. The listed rod-reel combo can be used for trolling and casting.

Single-handed baitcaster rods are an option for day-long casting sessions, these combos are missing the rod butt's lower section. DO NOT buy a low-quality baitcaster reel as they can be awful to use - if on a tight budget buy a spinning reel instead.

A 6kg spin outfit (eggbeater type reel) is fine for much tropical Queensland estuary and freshwater fishing. Lighter outfits aren't recommended as you may hook big fish in tropical waters. A 6-10kg rod-reel combo is needed for barramundi and threadfin salmon and this can also be used to cast lures to pelagic fish such as mackerel and tuna. A 3kg spin outfit is ideal for whiting, bream and flathead. See eBay listing here.

For boat fishing, a short, powerful rod with overhead or spinning reel loaded with 15kg braided line is ideal for general reef fishing in water to around 25m deep, and can also be used to troll for pelagic fish. See eBay listing here.

Heavier outfits are recommended for deeper water, always using braided line as its thin diameter is less affected by currents.

Bibbed hardbody minnows by quality brands such as Reidys and Classic are generally used for barramundi fishing. Barramundi are strong fish that tear apart the split rings and hooks on cheaply made lures, so buy wisely. Tropical tackle shops are well stocked with these lures.

Snapper leads are generally used on a paternoster rig for boat fishing. Heavy leads are needed in deep water because of ocean currents.

For most other fishing, ball sinkers are used, as part of a running sinker rig. Listing on eBay here.

Ganged hooks (joined chains of hooks) are used when fishing pilchard or sauri baits for mackerel. Listing on eBay here.

Lastly, Queensland tropical waters have saltwater crocodiles, stonefish, box jellyfish, irukandji jellyfish and ever-present sharks. These can all show up where you don't expect them, including in the shallows around boat ramps and beaches next to tourist resorts. Don't take risks.

Some external videos filmed around Cairns are featured below.