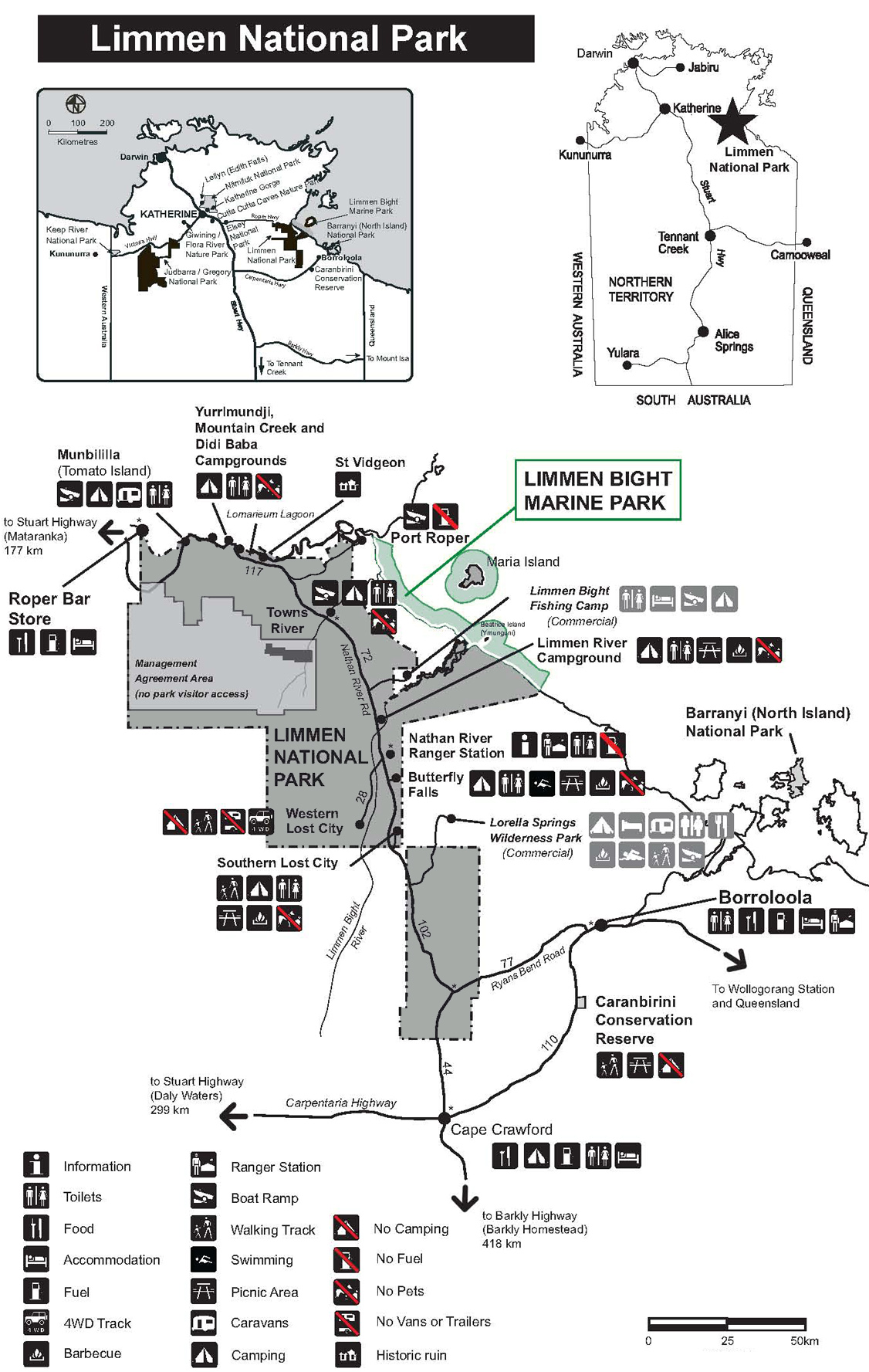 The eastern Top End is an exciting region for touring fishos, being far from population centres and therefore receiving less fishing pressure.

The habitat is first class, but fishing quality changes markedly with the seasons, depending on wet season rainfall.

Adventurous fishos who explore the coast in a boat will find tidal creeks that hardly see a lure or bait.

Most who visit here only fish the rivers and creeks, so the shallow reefs along the coast are hardly fished.

The eastern Top End has some of the Northern Territory’s great barramundi rivers, such the Roper, Limmen and McArthur.

The central feature of this area for travellers is Limmen National Park, declared in July 2012.

There are several camping areas within the park. Munbililla (also called Tomato Island) is the most important for fishermen.

Visitors can drive in from the north or south, but the roads are subject to closure from annual wet season flooding, and are often corrugated.

Munbililla (Tomato Island) campground on the Roper, opened in 2013. This used to be just a clearing in the bush near the concrete boat ramp, but it became so popular a proper campground was needed. It has ablution facilities and a ranger station.

Port Roper, at the river mouth on the south bank, has a concrete ramp and cleared space in the bush nearby that is used for camping. This is a “roughing it location” but huge barramundi, groper, salmon and jewfish are caught.

Small tides are best at the Roper mouth, which are difficult to determine as the river has sometimes unpredictable tides because of quirks of the shallow Gulf of Carpentaria.

South of the Roper is the smaller Towns River, which has camping near the riverbank, with an associated ablution block.

The Towns has good barra fishing and crabbing, but the fish are on average smaller than Roper fish.

South again is the Limmen Bight River, which offers a bush camping experience along the river banks at Steve Barrett’s private fishing camp.

The campsites are unimproved, next to tidal water, and boats can be moored nearby, but they will dry out at low tide.

Being sandy, it is quite clear, and even the last creek at the mouth can have several feet of water clarity unless the wind stirs it up.

Small tides are not always ideal for chasing barramundi, with the exception being in rivers with turbid waters.

Mining traffic diminished with the closure of local mines in 2014 after a commodity slump, but there are still heavy vehicles using the highway.

Visitors must take most supplies in.

Fuel is at Borroloola, Hells Gate, Robinson River community and King Ash Bay (McArthur River). Roper Bar store was closed at publication of this post but nearby Urupunga store sells to the public.

The Limmen camp supplied fuel in jerry cans at our last inquiry.

Tank water is at the Limmen camp only if there has been enough rain. Call first.

Keep in mind that the road is closed each year for the wet season. The roads are rough and can break trailers.